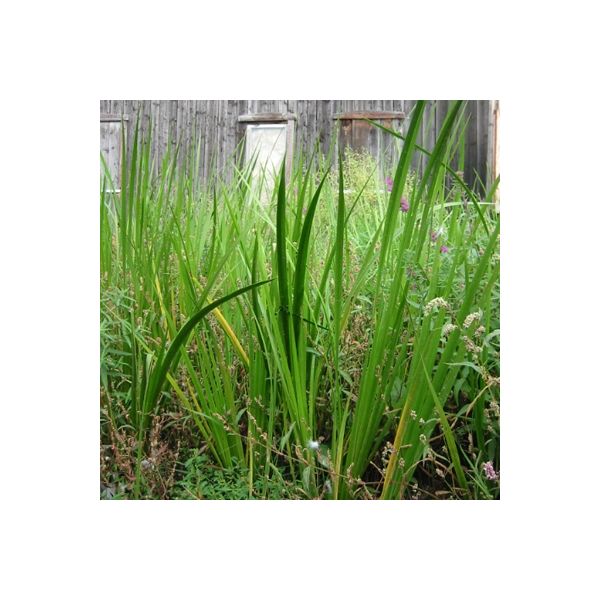 In Quebec, Sweet Flag is a rather southern plant, and it is quite rare in Northern regions, Laurentian Mountains and the Gulf of St. Lawrence. It is an aquatic plant of about 1 meter with straight rectilinear leaves. In the Middle Ages, it was used to make an aromatic ground cover in Cathedrals, and it is still used in perfumery and as an aromatic in beers, wines, and snuff tobacco. In India, Sweet Flag candy is widely used to treat children colics. In Quebec, the plant has an important role in popular medicine.

Often called « belle angélique » by Quebeckers and Sweet Flag by English Canadians, Acorus forms part of the Native American tradition. It is used to lower fever and relieve neuralgias and digestive disorders. It has been used as a treatment to repel bedbugs in the fur trade. Not widely known today, this native plant was once widely used for similar purposes by the various tribes of North America:

• As an infusion: against headache, stomach ache, intestinal cramps, flu, intestinal parasites, bloating, constipation, diarrhoea, fever, bronchitis, hypertension and diabetes, to help parturition, reduce menopause symptoms and regulate menstrual cycle.
• Ground root: mixed with tobacco to treat headaches. It was also used in poultice to cure sore teeth, abdominal cramps and sore throat. The plant is smoked in sweat lodges (« tentes de sudation ») and it is used to treat tuberculous arthritis and ear pains.
• As a decoction: to soothe irritations due to nettle and other irritating plants and to cure cholera.
• As an ointment: applied on the face or warriors to prevent over-excitement and fear during battles.
• Dried root: shamans used it, among other things, to protect children against the spirits of the night and ghosts. They would also advise fishers to tie some roots to their nets to attract fish.

Another variety of Sweet Flag with a completely different chemotype (containing a high percentage of asarone) is found in China, where the leaf and root are used in a smudge combined with Artemisia to repel insects. Changpu Acorus is found in the first Chinese pharmacopoeia Shennong bencao jing (around the beginning of our Age): (it) treats problems related to “humid and cold winds” and coughs and opposes the ascending Qi. It opens the way to the heart, nourishes the five organs, frees the nine orifices, clears the eyes and ears, and (helps) voice articulation. Used over a long period, it lightens the boy, enhances memory, prevents confusion and prolongs life. Other name: “changyang”.
Not to be confused with North American chemotype.

Enhances grounding and harmonizes our relation with Mother Earth.

It has often been used to flavour beer and brandy.

Strong and camphoric smell, used as a fixative. Base note.

Calamus root is often found in potpourris; it stabilizes the perfume of other aromatics. It has the same capacity as an essential oil and will act as a fixative in a blend; simply add a few drops in the mix to make it last longer.

All the citruses, cinnamon, frankincense and ginger.

May be neurotoxic and abortive in high dose.

Avoid use during pregnancy, breastfeeding and for children under 12 years old.

N.B.: It is very important to verify the chemotype and origin of this oil. Canadian Sweet Flag does not contain asarone.